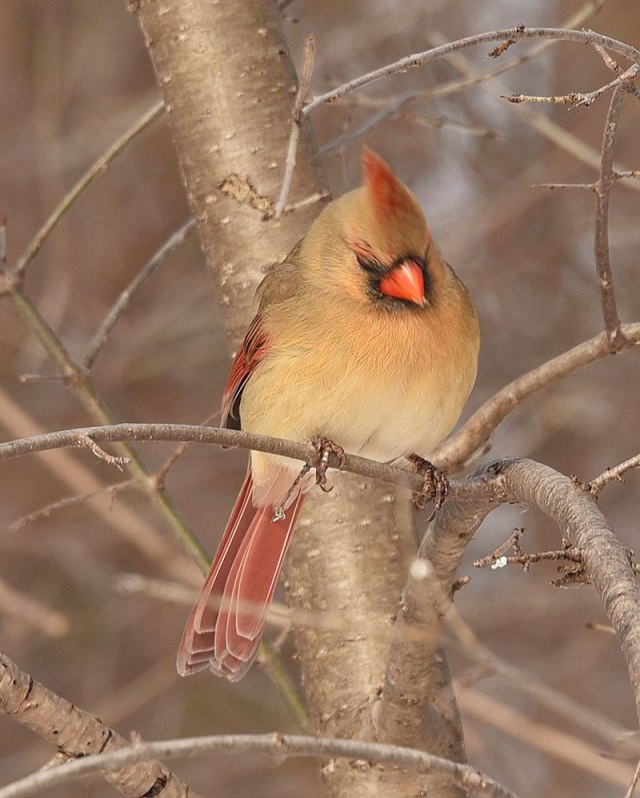 Today I walked to the Falls which I will feature on GWGT in the coming days. One thing rather strange happened in my glorious solitude while I was there. It takes me about fifteen or twenty minutes to walk to the Falls when the ground is covered in ice and snow. A little longer when I dawdle taking photos like I did today.

I mentioned on GWGT that I walk around 10 miles many days of the week and walking to and around the Falls is how the miles add up fast. I used to bike to the Falls, but getting grazed by a speeding Camaro ended my biking days.

Oh, you must want to know what happened today though. I was feeding the birds by hand, having five or six of them landing on me at one time and here comes this guy with a HUGE video setup. That is like a nightmare for me, a camera-shy little polar bear. Yes, I look a little like a white polar bear in my brown Uggs boots and gloves, and white North Face coat and hat. I do bundle up.

So he introduces himself and explains he is doing a documentary. He wanted interview me and started asking all kinds of questions to see what my answers would be. Since I described the experience of the icy surroundings as magical and told him I live in Niagara Falls, he was very interested in getting me on camera. He asked all about the birds too, telling me he saw lots of robins. I told him that I run a blog and right now the most popular post is Why are Robins Still Here In Winter. Of course I told him why since he asked and was very surprised to see them with all that ice at the Falls.

I had to decline his offer of fame though so you won’t be seeing me in any new HBO documentary or anything.

Yes, the Falls was glorious with trees wearing their icy coats. I am sure the documentary will be on the beauty of the Falls in winter, so keep an eye out. He was a very disappointed because there were very few people at the Falls. Lots and lots of birds though – many cardinals.